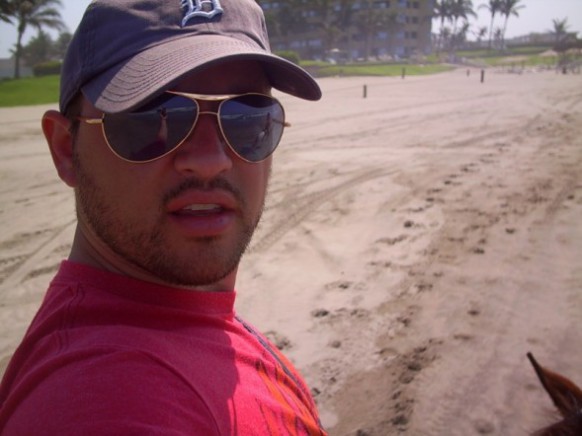 I've been writing for as long as I can remember.

When I was a kid, maybe 8 or 9-years-old, I wrote up something of a yearbook for my little league baseball club. Entitled the "Cardinals Crate of News," the program, in short, encompassed a brief synopsis of each ballers' season and strengths, and also provided a synopsis of the season that was. The sum was about a dozen pages. I don't know why I did that, I just did. Some years later, when I was about 12, my parents made up a mock big league baseball card of me for a birthday gift. I still have the card. On the back, in regard to "Future Aspirations," it said -- Writer.

And here I sit. More than twenty-years later, being a Writer is both a goal achieved, and a continued aspiration. I'll never be done with this job. I'll write until I take my last breath.

Sports and words have really combined to be the driving forces about who I've been, who I am, and the man I've always wanted to be. After graduating from Saint Thomas Academy in Mendota Hts., MN, I traveled east for my freshman year of college, enrolling at Emerson in Boston, MA, a school whose impressive list of alumni include Denis Leary, Jay Leno, and Norman Lear. I won't be counted among them. After a year at Emerson, I left that joint. Let's just say that the place turned out to be far less liberal than their literature and reputation suggest. One of the bright spots at Emerson -- aside from some great people I met -- was playing on the varsity baseball team, where I started at second base and earned a varsity letter. Please note the word usage of "started" and not "starred," as our bumbling club managed a curious record of 0-21. Over the course of the ensuing summer, when I was deciding whether to return to the coast, the coach called up my parent's home and kindly requested my return to the diamond. I told him I'd think about it.

It was the last time we ever spoke.

For the next four years, I attended, and eventually graduated from the University of Minnesota-Duluth. In short, the school (aside from offering some of the coldest damn winters I have ever experienced) did surpass my expectations academically. UMD has a pretty unfair reputation in Minnesota, in that many people think it's a place for dumbasses who come from all about rural Minnesota and consider Duluth a "big city." Not the case. In fact, I found the wealth of my classes and teachers there to be truly beneficial and interesting. One of the classes that made the largest impressions on me was my playwriting courses. Theater had become my minor, and let's just say that from ages 18-22, life, fun, and leisure had somewhat usurped some of my writing focus. But playwriting, and a fine teacher (and playwright) named Jon Berry brought me back from that smiling abyss. I felt I excelled in these classes, and produced some works that still make me laugh. Such interests led to multiple summertime internships at the renowned Playwrights' Center in Minneapolis, where I had the unique opportunity to observe the truly talented writer, Craig Wright ("The Pavilion," "Six Feet Under," "Dirty Sexy Money") workshop one of his first plays.

After college, I did something that I'd been dreaming about since I was a boy: move to Hawaii. I don't know why I'd always had the urge to do so, but it was there, in my gut. And I made it happen. Concurrent to the sojourn, I was hired for my first pro writing gig -- doing a piece about my experiences for Minnesota Monthly Magazine. My girlfriend at the time (who accompanied me for several months at our eventual destination) had a contact at the mag, and my pitch was accepted. All told, I ended up on the idyllic island of Maui for nearly a year. The girl was there for maybe four months. While on Maui, I was very productive from a writing standpoint. When not working a videographer gig at a fine resort golf course on the south side of the island, I was working as a sportswriter for the Maui Island Weekly, penning all kinds of crazy and fun pieces for the very cool editor, Mr. Dave DeLeon. When not working for Dave, I was working for myself -- feverishly typing out my first book, the short story collection Seven Days, on my trusty Olympia Traveler C typewriter.

Sound romantic? It was, although after eleven months I started to yearn for some continued focus for my work and life. Moving back to the Twin Cities was something of a trip at first -- adjusting to some post-collegiate reality and learning the emotional stakes of trying to be a real writer. Those stakes were first assuaged by the likes of Minnesota Law & Politics Magazine, where I got a job interning for the truly genuine, talented and smart triple-headed monster of Publisher Bill White, and Editors Steve Kaplan and Adam Wahlberg. Those gents still hire me to this day, seven years later, and I'll forever remember all the writing lessons and opportunities they've provided me over the years, wherever my writing journey ultimately takes me.

Sometimes we take the journey and sometimes the journey takes us. In 2002, I attempted to grab the former by the collar by self-publishing Seven Days with Beaver's Pond Press out of Edina, MN. The former proprietor, Mr. Milt Adams, was a guy with whom I felt something of a kinship, and I felt cozy giving him a small pile of cash to assist me in getting my fiction work out there. And he delivered. As did I, in some respect. While I didn't sell the number of books I'd had probably envisioned moving at the onset of the process, I did truly gain a wealth of knowledge about the book industry and the kind of hustle it takes to move books if your surname isn't King or Updike or Auster or Oates. The book received some sound reviews, and also gathered a nomination for a Minnesota Book Award. All told, the large degree of public readings I orgainzed and attended taught me a great deal about how to present my work.

And although I haven't put out any books since, I have completed two other fictional works, Man Among Billions and Arms Over Head. The former is another short story collection and Arms represents my first finished novel. I have made exhaustive attempts at getting both published via traditional routes, but alas, I've begun to adopt the philosophy that doing so in that vein is akin to winning the Powerball -- even if your stuff is solid and original. The other route though, I'll say again -- is a real dog fight. If you want to self-publish, you not only have to really, really believe in your product, but you also have to both have the time and make the time to get those babies out of their boxes and into readers' hands.

Today, through hard work, ingenuity, and persistence, I press on. If you read this far, you've likely sensed that I'm not a dude who gives up on a dream easily. I'm a hustler. And although nearly 2,000 of my freelance writings have appeared dozens of publications around the country and my name has some small degree of traction, I'm not close to being where I want as a writer. I feel I've had a great many successes and have consistently published work for better than 13 years, but still -- writing is a trade that may never be wholly finished or perfected. Maybe that's the draw . . .

As per "being," I can now be found living in Palm Desert, Calif., where I moved in the summer of 2011 after more than a decade of writing from the Twin Cities.

Pressing onward, little by little, has proven fortuitous, as evidenced by a Society of Professional Journaists Award I received in 2011. In addition, I'm now proud to call myself a member of the Golf Writers Association of America.

When I'm not reading or writing, I'm oftentimes playing sports including, but not limited to: tennis, racquetball, lifting weights, and lots of golf. A healthy body, healthy mind and all that. In my mid-to-late twenties, I could oftentimes to be found on the baseball diamond coaching youth ball. That was something that really meant a great deal to me, and I hope to someday return to that third base line.

Thank you, gentle reader, for taking the time to learn more about me. If you would like me to learn about an endeavor of yours for which you seek a writer like the fella I've just described, please don't hesitate to correspond. Until then, and always,